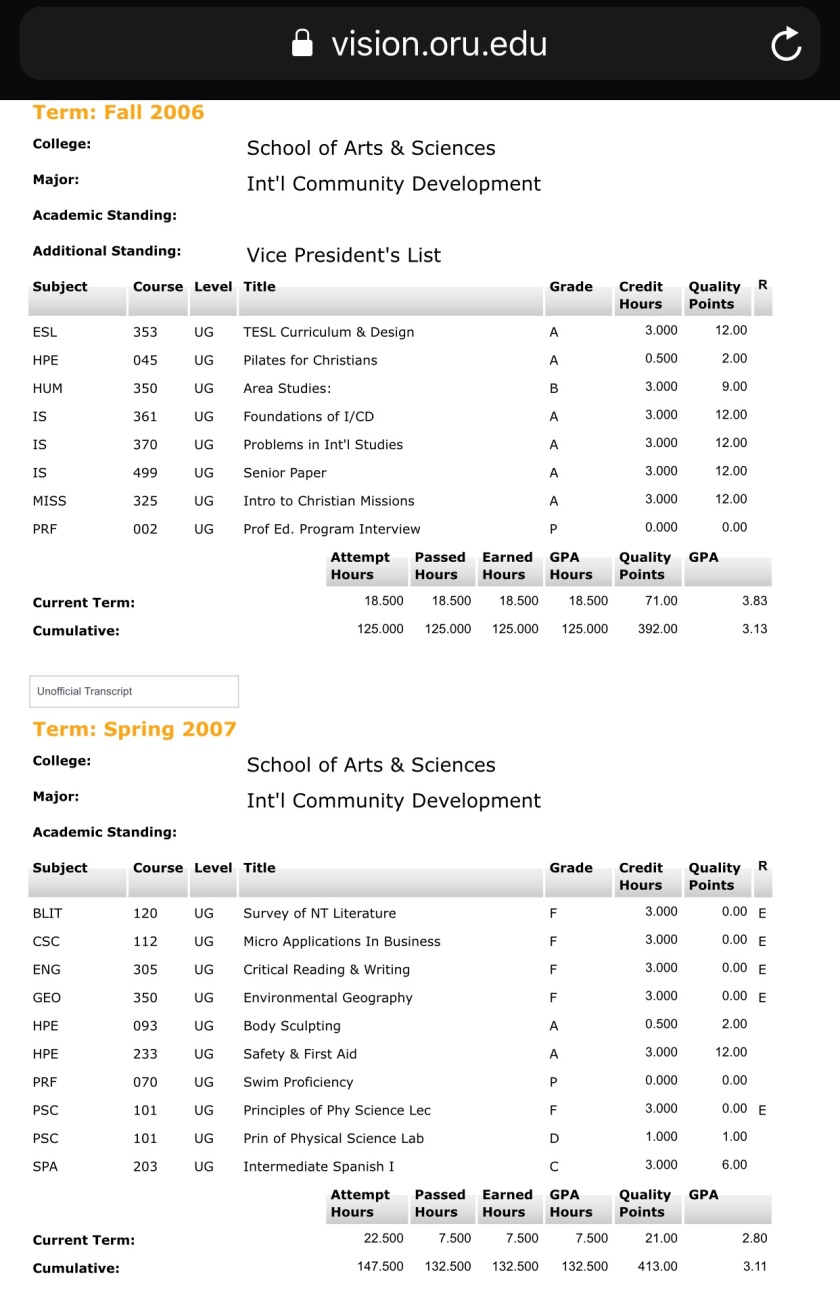 Nearly 12 years ago, I looked at my final grades as a senior at Oral Roberts University and wept. I’m smiling now as I glance over the FIVE F marks that could’ve easily motivated me to end it all. God just reminded of FIVE: the number of GRACE.⁣⁣

I’m no longer shackled to shame. I’m delighted to share my failures with you in efforts to encourage you to press, endure, and simply trust in the Lord.

If you would’ve told me that in 2003, when I took my journey to Tulsa to begin school at Oral Roberts University, that I would’ve been an EIGHTH year senior, I would’ve laughed and rolled my eyes.⁣⁣

Little did I know that a stroke two weeks before graduation would derail it all. My speech was stripped, my limbs were limp, and my mind was far from at peace. But that mild derailing led me to the most glorious path of restoration I’d ever discover.⁣⁣

2007 set off to be the year that would change everything; it sure did. In February I left for Ohio to visit my boyfriend at the time, not knowing that he’d sexually assault me while in his home. I felt guilty because my Mom clearly said, “Make sure you’re never alone with him at his house.”⁣⁣

So when I returned back to campus in Tulsa, I stuffed it. When everyone asked how my trip went, I lied and told of how everything was just perfect.⁣⁣

Fast forward to April 2007, when I worked desperately to wrap up the 22.5 credit hours that I foolishly attempted to complete in one semester. The goal: finish on time. Four years later, I’d finally finish.⁣⁣

For four EXTRA years, colleagues, family, friends, and other curious minds asked, “So when are you going to finish?” Or said, “You can do it. Don’t give up.”⁣⁣

Finally, I went to counseling because of my employment at Omaha Public Power District. Counseling at Best Care EAP was one of the perks in the benefits package at OPPD. I eventually went for help. I met a counselor named Trish. She broke something so significant down for me:⁣⁣

When I learned to break my goal down to smaller steps, I was able to climb faster to taste that sweet victory.⁣⁣

It might’ve taken me

four extra years of learning and lifting up my head,⁣⁣

four extra years of forgiveness and maturing my faith,⁣⁣

four extra years of knowing that I simply can’t do it all on my own.⁣⁣

It was my God—directing me to my army of accountability to push me further, cheer me on, and let me know that I’m never forsaken and never alone.⁣⁣

For those of you who are starting this year off with the memories of last year’s failures, let me share this with you:⁣⁣

For FOUR years on New Year’s Eve, a bit of my heart hung a low at our Watch Night Services. I was disappointed that yet again I hadn’t finished my degree. I allowed that weight to hang over my head and torment me. I’d later find that, I was simply being condemned by the enemy. “There is therefore now no condemnation for those who are in Christ Jesus, walk not after the flesh but after the spirit.”⁣⁣

I learned to enter each new year with a different posture in my heart. “My” goals couldn’t surround “me” any longer.

Whose problems can I help solve this year?

What can I invent?

What book should I write?

How can I empower others to solve their own problems?

How will God lead me regarding philanthropy this year?

Who can mentor me to become a better mentor?

What is my giving goal for the year?

How many students will no longer have student loans because of my responsible stewardship?

Whose mortgage can I pay off this year?

Who can I train for missions?

Who can train me even more in Christian apologetics so that I can teach it well?

When MY goals are centered around GOD’S Word,

that I’m on the right track,

Karissa Denae Johnson failed five classes in her senior year in college at Oral Roberts University in 2007. In 2011 she graduated with a Bachelor of Arts in International Community Development. Her concentrations are in Special Education and Teaching English as a Second Language. In 2009 Karissa and her three sisters (all under 30) earned their Church of God in Christ Evangelist Missionary licenses simultaneously in Omaha, NE. In 2011, this teacher with autism took her first trip abroad to Luton, England where she was welcomed by a host of strangers who became family. This life-changing group was the COGIC UK Jurisdiction.

Karissa Denae Johnson taught English in Hangzhou, China from 2012-2013. She also wrote for an expat magazine in China and made history as the first Black to model for a Chinese clothing company, Kawoxi. Miss Johnson taught freshmen women in college at the largest women’s university in the world, Princess Nora University. She also taught English at King Saud University.

Karissa is now the Executive Editor of the Voice of Missions Magazine—a Church of God in Christ publication with an impact in over 100 countries. Executive Pastor Karissa serves at Christ Cathedral COGIC under the leadership of her father, Supt. Kevin Johnson. During her free time, she polishes up her teaching skills as a substitute teacher for the Papillion-La Vista School District.

Presently, Karissa mentors and coaches executives, Ivy League graduates, pastors, entrepreneurs, social media influencers, and athletes. Miss Johnson speaks at businesses, schools, and organizations primarily. Rarely is she recruited to speak at churches. She is grateful for every platform to share biblical principles. She is the founder of the International Prayer, Fasting, and Healing Center which will be housed within Christ Cathedral in 2019. She is the author of 7 Steps to the 7th Continent: How I Planned for Antarctica and What Really Went Down.

As an explorer, Karissa visited all seven continents before the age of 30. She took her first trip abroad at 26 and made it to Antarctica at 29. Karissa made it her goal to share Christ on all seven continents through conversational evangelism. She reached her goal at 29. Her ultimate aim is to glorify God and “Live your life for what matters in eternity.”

Visit sevenby30.com to learn more, book her to speak, and purchase her books. To support Karissa’s efforts for Children’s Heaven in Addis Ababa give at PayPal.me/GIVEBIGETHIOPIA. Karissa gives $50 a month to sponsor a young girl whose family is impacted by HIV/AIDS. 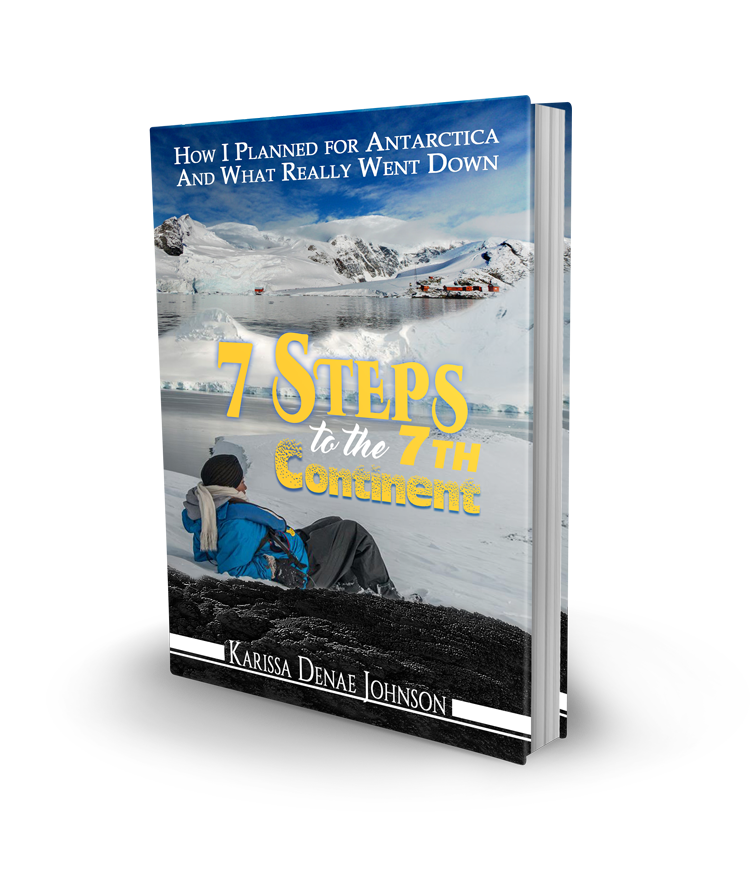 Karissa is the daughter of Kevin Lee Johnson and the late Tina Roberta Thuston Johnson. She is the sister of four, Kinesha Johnson-Roach, Kristina Ward, KaDar Johnson, and Karieta Walker.

P. S. Getting ready to go to the beach. I’m being hosted by fellow ORU grad, Ludwina Fulford. Been spoiled since I got here yesterday! Glory to God! 🙌🏿♥️💫